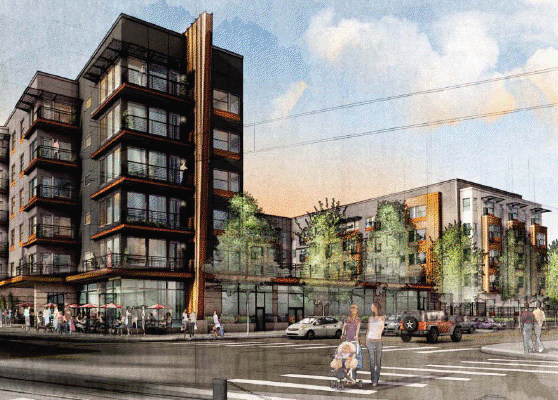 Developer Prescott Apartments LLC expects units to rent from $900 to $1,800 a month, depending on the size.

The building joins a handful of mid-rise buildings in the corridor including, the subsidized Killingsworth Station project completed last year.

“We think it’s an underserved market,” Tangen said. “It’s right on the light rail line in an attractive, upcoming neighborhood. It’s only three stops from the downtown core.”

The company is also building a New Seasons Market about a mile to the east on North Williams Avenue.

Sierra originally bought the block bordered by Interstate, Prescott, Skidmore Street and Maryland Avenue in 2008, shortly before the collapse of the real estate market. The land was subsequently sold to Prescott Apartments LLC.  A group of single-family homes that occupied the block were used as practice houses for Portland Fire and Rescue in 2009.

The building should be complete in early 2014.